Is visiting Rome in 3 days possible? I would say yes, although you cannot know all its places of interest. You cannot take it easy if you want to see as much as possible. Let’s say it can be the first contact with the Eternal City on a long weekend or on a bridge. Because surely you want to come back … Well, I’m in love with Rome, and I’ve been dozens of times. So, read what to see in Rome in 3 days.

What to see in Rome?

The difficult thing is to choose … It has cost me a lot but I think that this itinerary of things to see in Rome in 3 days includes more or less all the “super-essentials” of the Italian capital that are located in the most central area. Before embarking on the adventure, check out our tips for traveling to Italy and choose one of the 11 ways!

Rome is not a cheap city, so any idea to reduce spending is welcome. We tell you about the OMNIA and Roma Pass cards that allow skip-the-line and free access to some main monuments of the city and unlimited public transport.

What to see in Rome in 3 days: first-day itinerary 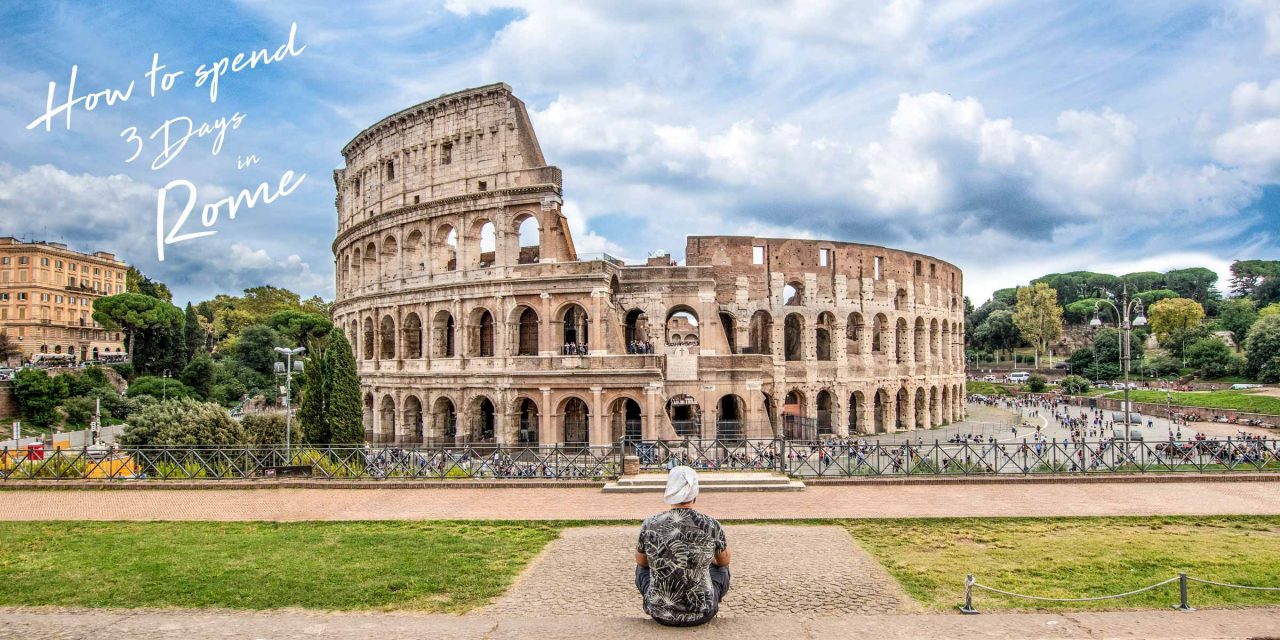 The first day in the city begins with the most classic icon, never better, of the capital of Italy: the Colosseum, Colosseo in Italian. We would need an entire article to talk about him … and, in fact, here you have it: The visit to the Colosseum in Rome: the icon of Italy par excellence.

If you want to enter and find out about the mechanisms behind their shows – including gladiators – you will have to book the visit when you buy your ticket. The number of tourists caused that they had to organize the hours of access to avoid saturation. The most advisable is to hire a guided tour, including the Forum and the Palatine, which will allow you to skip the lines, here you can see the price. Another option, more complete, is a guided tour that, in addition to the Colosseum, the Forum and the Palatine. It includes the Vatican – always without queues.

The next stage, right next to the Colosseum, is the Arch of Constantine. Arc de Triomphe ordered to be built by the emperor, at the beginning of the fourth century, to commemorate the victory in the battle of the Milvian Bridge.

From there you can go to the Palatino colle, the most central of the hills of Rome, where you will have beautiful views of the Roman Forum from above. Whether you have booked a tour, or if you have purchased tickets on your own, the entrance to the Colosseum includes the Forum and the Palatine.

After seeing it from above, it’s time to go down to the Roman Forum, the ancient Forum Magnum of the Romans, the center of the city’s social, political and religious life. There another triumphal arch awaits you, the Arch of Titus, and the Basilica of Maxentius, one of the most important civil buildings in ancient Rome, among many other remains. Upon leaving, you will have another beautiful view of the Roman Forum from the square in front of the church of Saints Luca and Martina. Behind the Campidoglio square is another viewpoint of the Roman Forum.

On the other side of the Plaza Venecia, there is a little-known jewel: the church of Gesú. The mother church of the company of Jesus, with its baroque facade that was replicated in many of the Jesuit missions in South America.

If you have entered nowhere and you have time, you can either walk or by bus – 81 or 628. We warn you it is likely that you will find a line if you want to reach out …

What to see in Rome in 3 days: second-day itinerary

The second day also begins with a great classic … even if it’s not from Rome but another country! Ok, it is within Rome and is one of the smallest countries in the world, but the Vatican City also counts. The incredible Plaza de San Pedro, designed by Baroque architect Gian Lorenzo Bernini, deserves some time. But, St. Peter’s Basilica could give for a full day alone. And it is that the largest Christian temple in the world and center of power of the Catholic Church could not be for less. La Pieta, by Michelangelo, is just one work you can find here … Get ready for Stendhal syndrome!

We recommend that you visit the Vatican Museums first, Musei Vaticani. The best option is to do it with a guided tour to skip the lines, kilometers. It is very difficult to choose where to look between so much the work of art. We have prepared a practical guide for your visit: The Vatican Museums and the Sistine Chapel, everything you need to know. As we mentioned before, there is also the option of the guided tour with the Vatican, the Colosseum, the Forum and the Palatine, look here for the price to see which one suits you best.

Touch to leave the Vatican City to go to Castel Sant’Angelo. Although another option would be to return in the afternoon to admire the sunset from your terrace. At the box office, don’t forget to say hello to Giacomo, my Italian cousin!

After crossing the Tiber and looking for something to eat, it’s time to get to the church of Santa María de la Paz, with its cloister of the architect Bramante, one of the most recognized of the Italian Renaissance.

Very close to the church is my favorite square in Rome: the baroque Navona square, built in the space occupied by the Domitian stadium, hence its shape. Of its three sources, the most famous is, without a doubt, the central one: the source of the four rivers – Fontana Dei Quattro Fiumi – of Bernini.

It is located right in front of the church of Santa Inés in Agonía – Chiesa di Sant’Agnese in Agone -, finished by Borromini, Bernini’s great rival. It is said that Bernini designed two of the figures sculpted at the fountain to make fun of his rival. Río de la Plata is raising his hands in a sign of protection against the fall of the building. And the Nile hiding his head under a Veil not to see the horrible church. You can also tour some of the most famous squares and fountains in Rome, including Navona square, with a guided tour if you want to know more details and do not want to go spending on the map.

You can dine in Trastevere, we recommend Da Lucia, or cross the bridge again and dine in the old Jewish ghetto, for example, in Da Giggetto at the portico d’Ottavia. Then, if the body endures, it is time to enjoy the nightlife of Trastevere or the Testaccio neighborhood.

What to see in Rome in 3 days: third-day itinerary

Neither one nor two … with three churches begin the third day. No matter if you are not religious, in a city like Rome, many works of art are preserved in buildings of worship, so you cannot stop entering.

The first is the basilica of San Pietro in Vincoli, with its famous mausoleum of Pope Julius II and his sculpture of Moses by Michelangelo.

The second is the papal Basilica of Santa Maria la Mayor, on the Esquilino hill. One of the four papal basilicas of Rome and the only one that has preserved its paleochristian structure. The central nave has an incredible golden wooden roof with, according to tradition, the first gold arrived from the Indies. Mosaics of the 5th and 13th century, frescoes that are masterpieces of the Italian Renaissance … nothing is missing!

The third church is one of our favorites in Rome: the Basilica of Saint Mary of the Angels and the Martyrs. It is projected by Michelangelo on the frigidarium of the Baths of Diocletian, of which it keeps some structures. Do not be influenced by its sober brick facade … the interior is lavish. Do not miss your great meridian.

In the same square is the Palazzo Barberini that, besides hosting the Galleria Nazionale d’Arte Antica. Another of the most important museums in Rome that in a short trip probably does not give you time to visit. It has two of the steps famous in Italy, of the two most famous artists of the baroque. We talked about the spiral staircase of Borromini and the Bernini staircase of honor.

The famous stairs of the Palazzo Barberini can be seen without entering the museum. They are located on the sides of the facade and you can peek from below for free.

After “darkness” and eating something, it touches light: we will no longer enter more buildings. From there, we go down to one of the most famous corners of Rome: the Trevi Fountain. The largest of the monumental baroque fountains in the Italian capital. Since November 2015 and after a few years of restoration, has regained all its splendor. There you can from throwing a coin to return to Rome. I have to say that I have never done it and I have returned many times to imitate Anita Ekberg in the Dolce Vita and bathe … if they leave you! Eye, which is a joke: it is strictly forbidden to bathe in the Trevi fountain.

The next stage is the Colonna square, dominated by the column of Marco Aurelio – raised to celebrate, in his reliefs, the victories of the emperor at war – which has been there since the year … 193!

From place to place and shot because it’s my turn. One of the most famous in Rome: the baroque Piazza di Spagna, with its Barcaza fountain – by Bernini and his father – and, above all, with its staircase of Trinità dei Monti, built to connect the Spanish embassy with the church from Trinità dei Monti.

After a pause sitting on the steps of the Trinità dei Monti, play a walk along the Via Condotti. The chicest in Rome, with its couture shops, and via the Corso, the most commercial street in the capital. We reach the end of the Via del Corso to see another of the most famous squares in Rome: the Piazza del Popolo, with its twin churches.

Last stage of the day: Visit the park of Pincio and Villa Borghese to relax a little in the center’s lung of the capital.